Long Island’s nightlife scene has always limped along, with Farmingdale being one of its few pockets of redemption. And the addition of Charlotte’s, a speakeasy located under a frozen yogurt shop of the same name, is now saving Long Islanders from boring, overcrowded bars with overpriced, watered-down drinks, providing refuge with high quality cocktails and live entertainment in a venue with decades of history.

While there are several self-proclaimed speakeasies on Long Island and in New York City, Charlotte’s can actually back up their claim; though exact years of operation are unknown, the basement of the building was used as a secret bar during the Prohibition era, from 1920 to 1933.

That history was not lost when brothers Nick and John DeVito—who also own the frozen yogurt shop upstairs—decided to bring the basement venue back to its original glory. The original wooden columns were repurposed to make the bar top and candle holders, and the tin wallpaper was reused in several places throughout the space, including to line the front entry way.

Charlotte’s is a beautiful picture of how past meets present; revelers both young and old belly up to the bar for a drink or lounge on one of the couches to enjoy the live jazz band, which plays every night. Adorning the walls are old photos of the DeVitos’ relatives, while a new “secret” bookshelf guarded by a doorman in the upstairs shop is the means by which guests enter the downstairs space. Repurposed tin wallpaper and wood from the old space sandwiches in the menu, which contains new twists on classic cocktails, as well as a handful of food items like pizza, wings, fries and frozen yogurt from the shop upstairs.

Bartenders are generous with their pour, but not to the point of overzealousness. Drinks are strong, but not overly sweet, and head bartender Matt Zeiss has curated a cocktail menu that fits the glamour of the time period.

Charlotte’s puts a twist on the traditionally beloved Moscow Mule by substituting bourbon for vodka, and the 1920’s Mule has found a well-deserved spot as the bar’s top-selling cocktail. Zeiss also exercises his mixology skills with the New Old-Fashioned, which combines Bird Dog Blackberry Whiskey, chocolate whiskey and cherries for a drink that’s as much dessert as it is cocktail.

Those looking for something with a bit more punch should opt for the Georgia Special, which is reinforced by Captain Morgan, Southern Comfort, apricot brandy, Peach Schnapps, pineapple, orange and cranberry juices, and is deceptively potent and tasty. Another item of note is the Gin Rickey, a straight-forward yet delightful combination of gin, St. Germain and club soda.

But before you can have any of these drinks, you have to know the password: admission to the speakeasy is contingent on telling the doorman the code word, which is on Charlotte’s website each week.

Charlotte’s Speakeasy is accessible through the frozen yogurt shop at 294 Main St., Farmingdale. Find out more at www.charlottesspeakeasy.com.

This article was also featured in the December 13, 2017 edition of Long Island Weekly on newsstands: 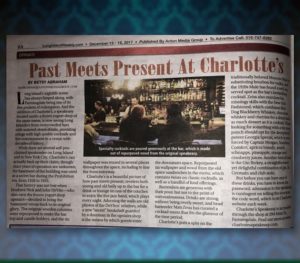